Skip to content
Home » Blog » Relationships » Qualities Of A Good Girlfriend: 7 Signs She’s The Right One

When you meet a physically attractive woman, you think…

“Ohh gosh! she’s hot. She would make a good girlfriend.”

You’ll easily end up in a wrong relationship that you’ll live to regret.

I have dated a couple of women. Some were hot and fun but weren’t worth a long term relationship.

First, if you’re looking to get yourself a girlfriend, you can check out and join eharmony for free. Their system will match you with women of your preference – in terms of age, locality, personality among others.

Potential girlfriend-qualities to look out for in a woman;

Most men end up in unsatisfying relationships because they get girlfriends for completely the wrong reasons.

Honestly – and from experience – you might not be ready for a long term relationship with a woman.

Have you ever taken the time to think about that?

You Should Ditch Getting A Girlfriend If These Are Your Reasons

The Right Reasons Why You Should Get Into A Relationship

Why Do You Need To Filter Out Certain Qualities In Women?

You want to choose a woman who you can be happy with for so many years.

A woman with whom you can build a satisfying relationship.

And you don’t have to stay with someone if the relationship is not giving you what you want.

You want to build a relationship for both of you.

Look out for long term qualities whenever you go out on a date with a woman.

That’s if you’re interested in a long term relationship.

If you’re only interested in casual sex, then you won’t necessarily need to look out for these qualities.

Unfortunately, most guys rely mostly on superficial qualities like a woman’s looks when trying to choose a partner.

like nice boobs, nice butt, big hips among others.

And that’s understandable from a biological and an evolutionary perspective.

Our bodies drive us to look for women who can successfully give birth to our children.

And there is nothing wrong with that.

However, having a girl who can give birth doesn’t necessarily lead to a satisfying relationship.

You can have a shitty relationship, but still, be able to have children.

So when it comes to looking for a potential partner, following your manly instincts will always lead to a bad relationship.

Building a satisfying relationship is something that doesn’t come naturally to the majority of us.

It is something that has to be learnt.

So What Are Qualities Of A Good Girlfriend?

1. She Has To Be Beautiful/hot:

Never be ashamed of going after girls whom you find physically attractive.

This is something a lot of guys struggle with.

Be true to your emotions.

And you should also let girls who you physically attractive know, straight up.

A lot of women love it and I have had many chase me because I let them know that I find them attractive.

Why did they chase me?

A lot of guys never do it.

It also shows the girl that you are a confident guy who knows and, goes after what he wants.

A lot of guys are nice guys who think that being straight about your sexual interest in a woman is not cool.

When most guys are interested in a girl, what do they do?

They beat around the bush by trying to be friends with the girl.

That puts the guy in a position that I do not want to find any bro of mine in.

It is called the dreaded friend zone.

However, while showing your desire in a woman, it shouldn’t be something so direct like “I love you”

Neither should you compliment her looks by saying anything like “you have cute eyes”.

You can DM her, for example, if it is a girl in your social circle something like…

“Hey, you looked hot/amazing in that short dress/skirt you were putting on yesterday”

Many girls will respond positively to this because very few guys do it.

As I said, so many guys fear expressing their sexual interest in women for fear of being socially awkward and rejected.

So when you go ahead and do it, you will have separated yourself from 95% of the guys out there.

Because you are simply following your masculine primal instincts.

When a woman is physically attractive, on the primal level, it means that she can easily give birth to healthy children.

However, what men find physically attractive in women tends to vary among individuals.

It’s only you who can determine which group of women you find physically appealing.

When it comes to physical attractiveness in women, there is no standard of beauty.

What I’m trying to point out is that you shouldn’t settle for a particular type of woman just because of what society considers as beautiful or hot.

But you should also not choose a woman to become your girlfriend or wife solely because of her looks.

This is a dating mistake I see a lot of guys make.

These guys end up in relationships with beautiful women, but with messed up traits like being so dramatic, dishonest and argumentative.

2. Highly Attracted To You.

If a woman is highly attracted to you, it increases the chances of you having a satisfying relationship.

While still dating, you have to always look out for the signals and levels of a woman’s interest in you.

When a girl is highly interested in you, it helps you to maintain a higher power in your relationship.

The woman will always be submissive to you and she’ll readily support your goals and dreams.

A girlfriend who loves you so much will never nag and disrespect you.

Even when she does something disrespectful, she’ll be quick to apologize when you call her out.

I have seen so many guys make a huge mistake of moving into relationships where they were more interested in a woman than she was in them.

How is that a problem?

Such men tend to pedestalise these women by default: they give their women too much value.

This causes such women to eventually lose respect and attraction for their men.

That causes the relationship to eventually break.

The man continues to stay in the unsatisfying relationship (because the guy will have over-invested in the woman).

The main cause of this is the lack of an abundance mentality.

Never make yourself think that you can’t easily find beautiful women or even get them attracted to you.

And never get so invested in a girl who is less attracted to you.

It is a very weak position that you don’t want to find yourself in.

Don’t be fooled by your emotions because she’s got a cute face and nice hips.

Find a girl who’s attracted to you.

Believe me, you’ll feel way happier in the relationship.

You are much more likely to stay in a happy and comfortable long term relationship with a loyal woman.

That gets easier the more your girlfriend feels attracted to you.

You have to take some quality time with a girl before committing to figure out her loyalty and some other qualities.

When Should You Enter A Committed Relationship With Her?

So it is always better to not rush into a committed relationship with a woman until you have dates for at least 6 months.

And the more you wait, the better.

Like… she can’t pretend for long. Girls tend to put on a fake persona during the early stages of dating.

Entering a committed relationship too early can cause you to ignore several red flags.

How to find out whether she’s loyal or not?

You can find out about her loyalty by looking at her past relationships.

Why did her past relationships fail, was it because she cheated on her exes?

Did she have relationships with married men in her past?

If the answer is yes, then chances are she’s got a problem with being loyal.

You can also determine a woman’s loyalty depending on the number of her past relationships.

If they are several (three or more) and short, that’s a huge red flag!

“What if she left all those guys because they were narcissists?”, you ask.

And that’s likely to be possible.

But, I’ll answer that with a question.

Why does she seem to attract narcissistic men?

Is it because that’s all she meets? Is it just a coincidence?

Then why? It’s because she’s a narcissist herself! Narcissistic girls find good guys boring.

We tend to attract who we are.

So they naturally end up attracting and dating the kind of guys who possess their traits: narcissistic men.

Another red flag could be if she’s kind of older (26 years+), but has never been in a long term relationship.

When a woman you are dating shows a pattern of disloyalty, it is to your advantage to end such a relationship.

Do not let your emotions cloud your judgement by thinking…

“oohh she will change”

“maybe there was a problem with her exes”

“I’m a nice and loving guy, so she will never cheat on me”.

Such women have underlying emotional issues which are hard to deal with and solve.

And it’s not your responsibility and problem to put her in the right shape.

4. Emotionally Stable or Not Too Dramatic. 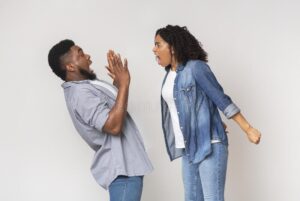 What does emotional stability mean?

Emotional stability means expressing emotions that are relevant to a particular situation.

You need to look out at how she responds to frustrations.

Most women have some sort of drama, but you should always avoid those who are too dramatic.

Women who are so dramatic lack self-esteem.

Emotionally stable women will not bring negative energy to a relationship.

You always need a woman who is not going to be stubborn and not willing to follow your lead.

If a woman is submissive, she will always be happy to support your goals and mission in life.

a woman who won’t be able to conceive anymore after having one kid.

I know it is kinda hard to find a virgin girl these days, but you also do not want to commit to a girl who has slept with a dozen men.

You can tell the promiscuity of a woman by looking at the number of dates you had gone to before she was willing to have sex with you.

If the girl was very willing to have sex with you on your first date, then chances are she is very promiscuous.

You can also use your instincts on this.

But like I said, you need to have spent some amount of time with the woman before committing to find out this one.

You may also ask the woman about her notch count. However, you shouldn’t rely on it because a lot of women lie on this one.

The number they tell you is usually way lower than the actual one. Nonetheless, a few will tell you the truth (usually if it’s very high).

When trying to make a girl become a girlfriend, do not try to change her so that she can fit the qualities you want.

If she doesn’t show them, you must look for these qualities in other women.

And never get into any relationship because of infatuation.

You need to have spent some time with the woman before committing to a relationship.

Do you need help with a specific dating problem? Book an email consultation with me and I'm going to get back to you ASAP.