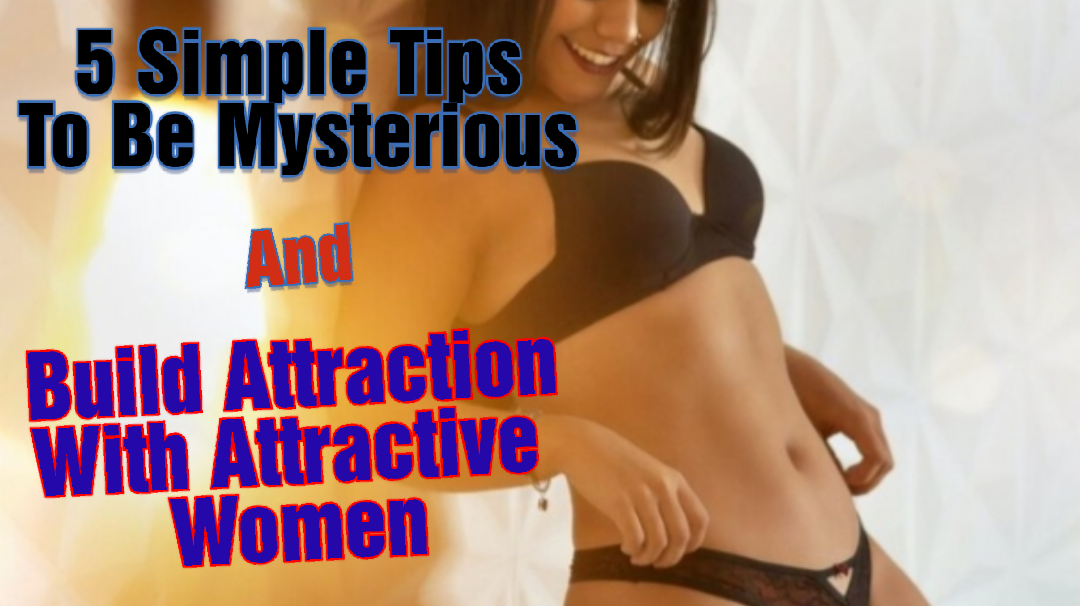 Imagine your brother narrating to you a movie you’re about to watch.

How would you feel?

Would you feel as enthusiastic?

I always found myself opening up and telling her so much about myself.

At first, the girls seemed to like it, but they soon got bored and any little attraction they had in me phased.

I realised later that I was always giving out too much information too soon.

It is always tempting to open up when you first meet a woman.

But you will always lose the woman’s attraction in the long run.

You should always use the element of mystery to your advantage when dating.

Think of a girl getting to know you or date you just kind of like a movie.

If she gets to know everything about the movie at the start, she is going to get bored and walk away from the movie.

Why Does Being Mysterious Build Attraction?

When You Are Mysterious, You Will Grab A Girl’s Attention

Grabbing a girl’s attention is key in dating because hot girls always have a lot of guys trying to get them into a relationship.

So when you become mysterious, you set yourself apart.

When an average guy goes on a date with a hot girl, he acts as if he is on a job interview.

He talks everything about himself like what he does for a living, he talks about his exes, his goals in life and all the cool things he has.

So that it gets the girl to become curious and always thinking about you.

And if you get the girl thinking about you, it means you can always have her attention.

Maybe she was hanging out with you because of the free food or she was bored on that Friday night.

Your mystery might get her frustrated. Is it a bad thing?

The reason why it may be hard to be mysterious during the early stages of dating is that a girl may become frustrated.

She may become frustrated simply because you are not chasing and trying to impress her as most guys do.

But her frustration in the initial stages of dating is a good thing and you should not be afraid of it.

It’s good because the girl is going to be more sexually attracted to you since you will be triggering an emotional response.

You will be creating tension.

And because of that emotional response and tension, she won’t get enough of you.

Isn’t that what you want?

How To Be Mysterious With Girls You Are Dating

1. Let the woman do most of the talking.

So when talking during the date or when chatting on the phone, you should always let the girl do a larger percentage of the talking.

You should let her do at least 70% of the talking.

Why do you need to let her do the majority of the talking and how to do it?

One way of letting her do most of the talking is by asking her open-ended questions.

What are open-ended questions?

For example, if you met a girl at a concert, you can ask her a question like “what was your coolest part of the concert and why?”

That’s an open-ended question right there.

That will cause the girl to describe her experiences in detail.

2. Guess the answer to the question you would want to ask.

Instead of asking her a direct question, you can just try to guess the answer to the question you want to ask.

Assuming you are approaching a girl in college instead of asking her ” “In which year are you?”, you can simply say “you are in year three, right!”.

How does that build curiosity?

If you guess it right, she would want to know how you came to know.

And if you guess it wrong, she would want to know why you thought that about her.

So you are being mysterious and fun.

The number of guys I see over texting girls is ridiculous.

You need to know the dos and don’ts when it comes to texting in dating. Texting is simply a tool to set updates.

When you message or talk on the phone too much, you risk revealing a lot about yourself.

Remember, a girl would want to hang out with you because she wants to know more about you.

So, if you reveal everything about yourself before going on the date, then it means there is no reason for her to meet up with you.

And it’s through meeting up with a girl, where you will be able to build an intimate connection that would make the girl want to hook up with you.

Overcommunication before meeting up with a girl also kills the anticipation.

You want to let her wonder and think about you before you hang out.

When you have a woman always thinking about you, that’s how she develops a love for you.

Besides, you can’t create an intimate connection with a woman on the phone or through text.

4. Reveal things about you over time.

When I talk about being mysterious, I do not mean that you shouldn’t reveal anything about yourself to her.

You have to reveal a few things to create anticipation so that she would want to find out more about you.

This will also make the girl want to keep going out with you several times so that she can know more about you.

I see guys who always complain about girls who refuse to go out with them for a second date.

This is because the guy revealed almost everything about himself on the first date.

So the urgency for another date was killed. You must create opportunities for a girl to think about you.

How can you reveal things about yourself over time?

• Don’t tell her a lot of deep information about yourself.

Like your passions in life or what you do for a living, without her asking.

What if she asks you for serious information? Like “What do you do for a living?”.

You need to go around such a question and throw it back to her.

You want to first give her a silly answer like “ooh, I am the president/prime minister of this country” (assuming the person reading my article is not a president hahaha)

Then you can ask her back.

“What do you do for a living?”

If she persists then you can tell her your real profession/job.

This way she will also see you as confident, exciting, fun and unpredictable.

• When she asks you a question that requires a lot of details, you can keep your answers general.

You let her dig for the details and specifics herself.

This can be tough for guys to pull off because of one reason.

Bragging and showing off.

So many guys make a huge mistake of bragging and telling a girl a lot about themselves when a girl asks them a question about their job/profession.

If you brag to a girl by talking about how much money you make at your job or your other smarts.

You’re going to kill the girl’s attraction faster than a speeding bullet.

It shows that her value is higher than yours because you are trying to impress her.

It’s a no brainer.

If you have a cool car and house, for example, you can go on your first date and then you can reveal your awesome car when you going out for your second date.

And reveal your cool house when you invite her back to your place.

When you do this, her attraction to you will increase because you decided not to brag about your cool life.

By the time you date a hot woman, she will have met a lot of guys who wanted to get into her pants by bragging, showing off and buying her expensive things.

So when you brag, she sees it as a red flag and her guards automatically go up.

Putting on a smirk means you smile with your eyes without opening your mouth and showing your teeth.

You can also check out George Clooney and Brad Pitt photos on how a smirk looks like.

You should practice in the mirror so that you come up with something that feels natural to you.

This way, when you look directly in the eyes of a hot girl with a smirk on your face, she will be kinda curious.

She will ask herself “Is this guy interested in me – because you are making eye contact – or not? (because you ain’t saying nothing)”.

I have had so many of my coworkers start to chase me ever since I introduced the smirk into my dating arsenal.

When you make eye contact with a smirk, you will be applying two of the top qualities in you that make women find men sexually attractive.

Always make eye contact with a smirk with the opposite sex, and you will thank me later.

Whenever you meet a woman whom you want to attract and hook up with or become your girlfriend or whatever the hell you want, avoid being predictable and boring.

Don’t reveal too much too soon. You do not need to prove to the girl that you are a perfect match for her by talking too much about yourself.

You will just instead push the girl away.

You can only prove to her that you are good for her by being mysterious and letting her find most of the awesome and cool things about you indirectly.

If you don’t be mysterious and reveal most of the cool things about you at once, the girl may seem to like you at first.

But she is going to lose interest in the long run.

Because you will look predictable and boring.

Most of us have ever been there. We pushed away girls who would make awesome girlfriends without even realising it.

We gave away too much info about ourselves too soon.

So do not make the same mistake.

Do not hesitate to share this information with your homies on social media if you have digged this article.

How Can You Be Mysterious With Girls?

1. Let the girl do most of the talking.

2. Guess the answer to some questions you want to ask.

3. Communicate less through calls and texts.

4. Reveal things about you over time.