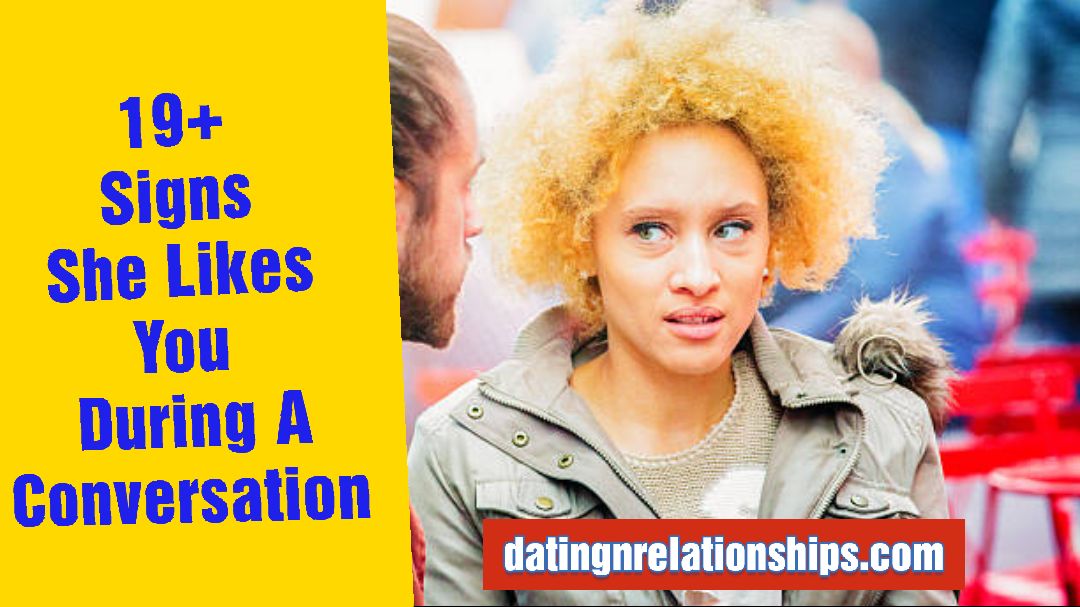 A couple of years back, I used to have girls stay in a conversation with me so I assumed that they had romantic feelings for me.

A girl who likes you will want to stay in a conversation with you, right?

But this may not be always the case.

She could just be flirty, bored or she doesn’t want to reject you and make you feel bad.

So you will need to look out for some signs if a girl likes you during a conversation.

When you are in a conversation with a girl, she will never tell you verbally and straightforward whether she likes you or not.

Girls naturally use more indirect communications when it comes to dating.

Unfortunately, some guys think that a girl should communicate her interest straight up or verbally.

They look at a girl’s display of signals of interest as “playing games”. “Why can’t she just tell me whether she likes me or not, I hate her games”, a guy thinks.

But this is partly not a man’s fault because as men we are naturally very logical. We naturally prefer direct communications.

But girls communicate indirectly when it comes to dating.

This is why, when a girl shows you signals of interest during your conversations, to her they are very clear signs.

Being naturally very logical, as a man, you may fail to notice them.

At least at the start. How I wish women would just tell us straight up whether they liked us or not.

Signs a girl likes you during a conversation.

#1. She feels nervous around you

When a girl is into you, she will often feel nervous and anxious while talking to you.

It is the same thing when you are around a girl who’s so attractive and you like her.

You can look out for signals of nervousness like fidgeting with her hands and dropping objects she could be holding.

When a girl is talking to you whilst touching you, it could be a sign that she likes you.

Look out for light touches when she is laughing at your funny statements, for example.

If you are in a conversation with a girl and she keeps maintaining eye contact for a prolonged time, it shows that she is giving you her attention.

Girls give their full attention only to the guys they are attracted to.

So if she looks into your eyes and holds her gaze, it won’t be a coincidence.

This is a signal of submissiveness.

This is why it is unattractive for a man to make eye contact and then look down.

But it makes a girl look attractive because guys, on a primal level, love submissive girls.

So when a girl gazes down after making eye contact with you during a conversation, she is being submissive to you.

And girls become naturally submissive, again on a primal level, to guys they are attracted to.

#5. Restarts the conversation when it lulls.

You may also use this to test if a girl is interested in you by allowing the conversation to pause on her end. Then see if she tries to restart it.

When a girl likes you, she will point her entire body towards you. This is another signal that she is giving you her full attention.

Her body will also be open rather than closed.

If you are in a conversation and all of a sudden the girl starts coming closer and closer to you, it’s a huge sign that she finds you attractive.

Girls are very sensitive to their personal spaces.

So it won’t be an accident that she is getting you into her personal space.

This, on the other hand, means that you can as well test a girl’s interest levels by getting close to her.

If she reacts negatively, by leaning back or closing off her body, it could mean that she has little or no interest in you.

#8. Her pupils dilate and sparkle

When she gazes into your eyes, her pupils become dilated. Dilation of pupils is a sign of excitement and anxiety.

She becomes excited and anxious, at the same time, because she’s attracted to you.

#9. Laughs at your non-witty statements

A girl who is so into you will laugh at your less funny comments as if they are the funniest in the world.

#10. She complements you about anything

When a girl compliments you during a conversation, it shows that she is paying attention to you.

She will try to compliment you on very simple and normal stuff.

A girl who is not attracted to you will rarely tease you. Teasing is a trait that comes naturally to girls, but something that most guys can’t grasp.

So when a girl likes you, she will often tease you playfully during your conversations.

#12. She mirrors you during the conversation

Again, on a primal level, girls become more passive when they meet a guy they are attracted to.

One way of naturally doing this is by mirroring your behaviours.

So during your conversations, you may look out for one or two of the following things she does to match yours

#13. Gives you the most attention.

When you are talking to a group, she will pay the most attention to you.

Even when others seem to be ignoring you, she will still be paying attention to you.

She will be listening closely to what you have to say.

#14. Shows you how she loves the same things you like

If a girl takes an effort to show you how much she likes the same things you like, it shows that she is attracted to you.

It shows that she is naturally trying to build rapport.

#15. The foot is pointed toward you while seated.

When she is talking to you, with her legs crossed, look at the foot of her top leg.

If it pointing towards you, it means that you have got her attention. It means that she likes you.

#16. Displays open palms towards you.

#17. She is energetic during the conversation

If a girl is attracted to you, she will often feel super energetic while talking to you.

She feels excited and enjoys talking to you because she likes you.

#18. She asks questions about you.

When a girl likes you and attracted to you, she will ask you about personal and deeper questions. She would want to know much about you. Questions like;

#19. She touches her face while looking at you

#20. Keeps playing with her hair

#21. She may talk about things you can do in the future.

Signs a girl doesn’t like you during a conversation

One thing you may need to note is that a girl has to show you a combination of these signals before you conclude that she isn’t interested in you.

This shows that she may not be interested in the conversation or staying with you.

So that whenever you try talking to her, she looks away.

#2. She gives you a negative body language

For example, when you try to point your whole body towards her, she closes off her body or she will try to lean back away from you.

#3. She seems not excited about talking to you.

When a girl has less interest in you, she will tend to feel unenergetic while talking to you.

She won’t feel any excitement and urgency.

#4. She will give you one-word answers.

A girl who is not interested in you will try to invest less in your conversation by answering your questions with one-word answers.

She will not want to take any effort talking to you.

If a girl likes you, she will answer your questions in details and keep the conversation going for a long time.

During the conversation, she will close off her body by folding arms in front of her chest or cross her legs at the ankles.

#6. She avoids your touch

During your conversations, she will often act negatively when you slightly touch her by tapping her upper arm, for example.

She will try to pull back from your touch or act in any other uncomfortable way.

This shows that she is not paying attention to you. As I said, a girl who isn’t interested in you will rarely give you her full attention.

If you aren’t her boss at least.

#8. The tone of her voice is neutral.

As I said, a girl who is attracted to you will always try to match her voice tone to yours or, at least, have a lower voice tone.

So if the tone of her voice is super neutral like she is talking to a random person, chances are high that she might be having no interest in you.

#9. Scratching her nose or the back of her neck

Before you make any conclusion on whether a girl likes you or not, it is better if you look at a combination of the above signals.

If a girl is interested in you or not, she will give out several signals during your conversations.

If you are not yet so sure whether she likes you or not you can read this article where I show you how to actively test the girl to know if she is interested in or not.

Signs that a girl likes you during a conversation, in summary

• She feels nervous around you

• Restarts conversation when it lulls

• Gives you a positive body language

• Gets close to you

• Her pupils dilate and sparkle

• Laughs at your non-witty statements

• She complements you about anything

• She mirrors you during conversations

• Gives you a lot of attention

• Shows you how she loves you the same things you like

• Foot is pointed toward towards you while seated

• Displays open palms towards you

• She is energetic during the conversation

• She asks deep questions about you

• She touches her face while looking at you

• Keeps playing with her hair

• She may talk about things you can do in the future

Signs a girl doesn’t like you during a conversation

• She looks away from you

• She gives you a negative body language

• She seems not excited talking to you

• She will give you one-word answers

• She will have a closed body

• She avoids your touch

• The tone of her voice is neutral

• Scratching her nose or the back of her neck

I hope this article has helped you    (and hey, if you think it’s cool, I’d appreciate it if you’d share it on social media.)