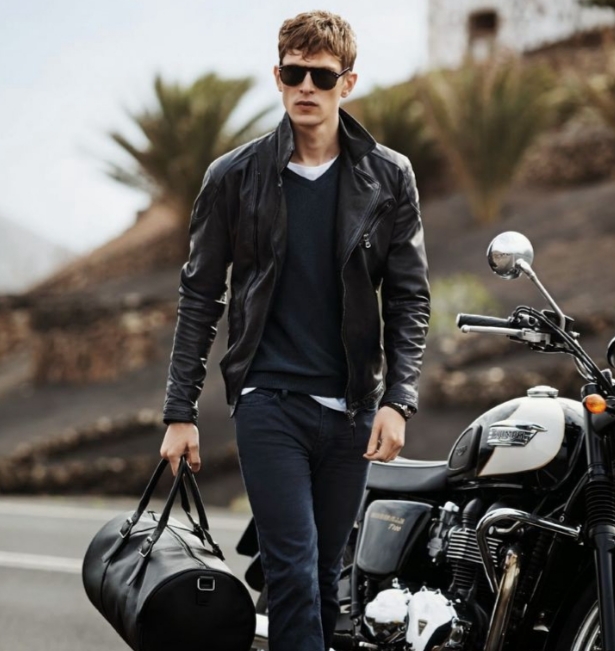 Hi yo! So you want to know the signs of a bad boy and the traits that make a bad boy attractive to girls?

Never mind, you have got yourself to the right place.

You don’t want to become a jerk

However, you shouldn’t confuse bad boys with jerks or assholes.

Assholes also have bad boy traits like not caring too much about what others think of them, they are unpredictable and have a sense of humour.

But they have a ton of undesirable traits like bullying people and being disrespectful.

So jerks often date girls who have low self-esteem and a lot of emotional problems.

They make their girls go through emotional roller coasters.

So you should never become a jerk. So many nice guys who try to turn into bad boys end up becoming jerks.

You should become a bad boy. Bad boys give their girls a lot of positive emotions.

Unlike jerks who give their girls a lot of negative emotions.

So how can you tell if you or somebody else is a bad boy?

What are the signs of a bad boy?

You can tell a bad boy by the way he carries himself.

Here are signs of a bad boy.

Behaviours of bad boys originate from their mentalities.

One of the mentality that bad boys have and that gives them that carefree vibe is an “I do not care what you think of me” kind of attitude.

He will do whatever he wants and when he wants it.

He rarely cares what others think of him.

When the rest of you are scared of doing something you’re supposed to do because you might offend someone, the bad boy will go ahead and just do it.

When the rest of you are scared to approach that attractive girl, the bad boy will walk straight up to her and start a conversation with her.

Bad boys are carefree because they care less about what others think of them.

#2. They Have Problems With Following Rules

Bad boys often want to think for themselves. So they sometimes end up breaking rules.

They prefer doing their own thing other than following the masses.

Bad boys do not do well in situations where everyone is required to follow strict rules and regulations like schools and the army.

Perhaps, it could be the reason why bad boys become successful entrepreneurs and famous people.

They set their own rules – without breaking the law – and follow them. They do not go with dogma.

Bad boys rarely apologise. This is the opposite of a nice guy.

A nice guy apologises all the time for every little thing.

This looks counterintuitive but it is a huge turn off for girls.

A nice guy will apologise whenever.

Bad boys never put their girlfriends on a pedestal. They never do everything to impress her.

A bad boy has a lot of good things going on in his life. His validation and self-worth are not dependent on his hot girlfriend.

So that could mean that he may not always be available to hang out If he has his other own plans like hanging out with his guy friends.

A nice guy treats his girlfriend like someone very special. He treats her like a one in a million.

A bad boy treats his girlfriend like any other normal girl. He treats a girl special only if she’s earned it.

When a girl misbehaves by flaking on a date, for example, the bad boy withdraws his attention from the girl.

A nice guy will treat a girl nice and special regardless of her behaviour.

You will rarely see a bad boy smile while showing his teeth. Bad boys often smile with a smirk.

He smiles with his eyes, not with his mouth. He tilts the mouth slightly to one side without showing his teeth.

He will tell you straight up. Whether it is a random person or an attractive girl. This makes bad boys look arrogant.

But girls and people in general respect bad boys despite their “arrogance”. They are not pushovers.

They will never allow anyone to walk all over them.

If you do, the bad boy will state his opinion without explaining himself.

He will tell you what he doesn’t want without the need to explain why he is right and why you are wrong.

Nice guys often do the exact opposite. They let people walk all over them because they don’t want to offend anyone.

Most nice guys are people pleasers. This is very true when it comes to attractive girls.

Girls often end up walking all over nice guys because nice guys fear that if they try to stand up for themselves, they may lose the girl.

They fear taking the risk of losing the girl’s validation and attention.

So they sacrifice their values and boundaries for the girl’s attention and validation.

#7. Bad Boys Are Leaders in Society.

People in society look up to bad boys.

This is because of their leadership skills like assertiveness, taking initiative, decisiveness, being brutally honest and being charismatic.

Bad boys also become leaders because they tend to assume that people will follow their lead since they do not like following others.

#8. A Bad Boy is Unpredictable.

You will never be sure of what a bad boy will do next. It’s very hard to predict the bad boy’s next move.

A girl will never know if his bad-boy boyfriend will hang out with her or not.

She is never sure whether he will commit to her or not.

She is never sure whether he will reply to her text immediately or not.

#9. Bad Boys Have a Sense of Humor

Most of the bad boys have a sense of humour that is above average. They can easily make people laugh.

They have an incredible sense of humour because they rarely filter themselves.

They say what is on their mind without second-guessing themselves.

This makes bad boys have an incredible social vibe because they aren’t always stuck in their heads.

They are always in the moment having a nice time. This makes girls and people, in general, want to be around bad boys.

Girls get a dopamine rush whenever they are around bad boys because they can easily make a girl laugh.

Bad boys also never take themselves and life so seriously.

Though they never allow anyone to walk all over them, you can easily tease a bad boy because he will rarely get offended.

When a girl says something sarcastic to a bad boy, he just laughs it off. He is never phased by the girls’ shit tests.

This is the opposite of nice guys. Nice guys take themselves and life too seriously.

When you playfully tease a nice guy, he can easily get offended.

When you say anything silly and playful to a nice guy, he will start to act defensively.

That is why nice guys find it had to score with girls.

They find it hard because girls often test a guy’s confidence and emotional strength.

They do this through teasing, a skill that comes naturally to girls but troubles guys.

They tease a guy by giving shit tests.

Any guy who lacks a sense of humour or a nice guy who takes himself too seriously will fail to pass the girl’s shit tests.

Another sign of a bad boy is that bad boys have a lot of options when it comes to girls.

You will often find a lot of girls surrounding bad boys.

The truth is that girls like bad boys. Girls love spending time around bad boys.

This gives bad boys an unfair advantage. Bad boys have traits that attract girls on a primal level.

As I said, these qualities give bad boys an unfair advantage when it comes to dating.

Nice guys have qualities that often push girls away. Traits like

All these traits put the nice guy at a disadvantage.

So, we end up with a situation where most girls want to date the few bad boys.

So by becoming a bad boy, you will have an unfair advantage.

Because they have a lot of options, it becomes hard for bad boys to commit to one girl.

Bad boys rarely commit because they have qualities that can attract gorgeous girls.

So they end up dating 2 or more girls. They end up having sex with lots of girls.

Why would girls want to be with a guy who is a player?

She should give a chance to a guy who loves her so much. One who’s willing to commit to her and who is more likely to be faithful.

And that’s literally where the problem lies.

You’re not being a challenge to the girl!

Girls think that they can get the player to commit. But most of the times, it never happens.

The thing is girls, love challenges. Just like anyone who is success-driven. So a player bad boy presents himself as a challenge to attractive girls.

Girls want to feel like they earned success by making a player commit.

Additionally, girls also want to feel like the guy they are dating is wanted by lots of girls.

That is why if you want to ever attract and keep hot girls, you must stop thinking that every hot girl you date is a one in a million kind.

Why? Because it will be very hard, if not impossible, to present yourself as a challenge to the girl.

What makes a bad boy is not because he is “bad” but because of his mentality and behaviours.

You can easily tell a bad boy by the way he carries himself and by the way people treat him.

Here are the signs of a bad boy, in summary.

• They have problems with following rules

• He smiles with a smirk.

• He is brutally honest.

• Bad boys are leaders in society.

• Bad boys have a sense of humour

I hope this article has helped you    (and hey, if you think it’s cool, I’d appreciate it if you’d share it on social media.)