Well, you’ve been texting a girl back and forth, but she stopped replying all of a sudden.

You met a woman, she gave you her number, but you didn’t get a reply from her when you tried to reach out.

This left you asking yourself the following questions;

“Why isn’t she replying?”

“Is she just ignoring me?”

“Didn’t she see my message?”

The truth is that all of us have been there.

We are going to be looking at what that means.

And most importantly, what you should do about it without screwing things up.

When a girl doesn’t text back, it could mean that you made some mistakes that made her lose interest.

Now, how can you tell the difference?

What Does It Mean When She Doesn’t Text Back?

The reason she didn’t text back was that you engaged in pointless texting.

So, that made the girl to lose interest.

If you’re texting a girl you’ve just met, texting should be a means to set up a date.

That should be your number one goal of texting a girl who isn’t your girlfriend, yet.

Texting the girl aimlessly will get you friend-zoned!

You need to make a move as soon as possible.

If you delay making a move, the girl might take it like you are just being friendly.

When you finally ask her out (make a move), it will be too late.

She’ll have already placed you in the friend zone.

“I thought we were just friends!”

And she’ll be damn right.

The point is that if you over text a girl, three things are most likely to happen;

So text the girl for a short time, ask her out on a date before she loses interest and stops texting you.

When a girl feels bored by your texting, she may stop texting you.

What caused the boredom?

You made the texting too formal.

Texting is an informal form of communication.

When you’ve just met a girl, your texts should be short, playful, flirty, and fun.

If you make texting girls too seriously, by sending her long, and logical texts the girl will feel bored.

And she’ll soon sending you messages.

If the girl you’re pursuing is single and beautiful, she’ll have so many other guys sending her messages and trying to seduce her.

So, when she asks you a question and you respond with an explicit, boring, logical answer, she won’t feel any urgency to keep texting.

When sending a girl a message, don’t overthink it.

Text her whatever crosses your mind.

If you care too much, you will be much more likely to turn her off.

Girls resent guys who are always walking on eggshells around them.

That isn’t masculine and shows a lack of self-confidence.

As I said, if a woman is hot, she will have plenty of options in real life. 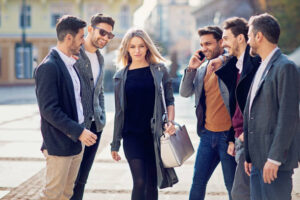 Girls who have several guys to choose from instinctively develop a filter to sort out guys who are strong (emotionally) and who have a lot of self-confidence.

They do this by testing you.

So, the woman will delay replying to your texts or stop texting in the middle of a heated conversation to see if you’ll react emotionally.

The woman does this to make sure that the guy she’s interested in is self-confident.

Because if she just walked right up to you and asked…

“Do you have a healthy self-esteem?”, you would say… “yeah“, right?

Any guy who would be interested in the girl would do the same if that meant hooking up with her or starting a relationship.

But guess what is hard for most guys?

It’s remaining calm, cool, and collected if the girl stopped texting back in the middle of a heated conversation.

If a woman delays responding to your text, Don’t;

If you do any of the above, you’ll have failed the test.

And she’ll most likely lose interest and will eventually stop texting back.

#4. She could be playing hard to get.

Some girls have a lot of pride.

It could be that the girl doesn’t want to seem like she’s easy to get.

Hence, she’ll delay replying to texts to prove that.

She doesn’t want to look like she’s desperate for your attention.

Again, in such a situation you shouldn’t act desperate by double texting, asking why she’s delaying to reply.

Or else she may lose any romantic feelings she might be having for you.

#5. The girl wasn’t interested in you from the start.

The girl may not reply to your text because she didn’t feel any attraction to you.

The woman was just being nice when she gave you her contact. She didn’t find the most appropriate way to reject you.

The woman wanted to get rid of you when you approached her.

It could be that the woman had an interest in you by the time she gave you her number.

But she, later on, lost the interest.

If this happens, it will mean that you never left a strong impression on her.

You simply didn’t build a strong sexual attraction on her side.

So, it all faded when she moved out of her sight.

when you want her to keep thinking about you, you will need to build an emotional connection with her.

The fact is, a woman will keep thinking about you depending on how you made her feel.

If you don’t make her feel any emotions, she’ll be much more likely to forget about you.

So, she won’t feel any desire to reply to your messages.

If you’re around a woman, but all you do is brag, engage in logical conversations to try to impress her…

she won’t feel any emotions because you were appealing to her logic.

Again, this makes her lose attraction to you, and the chances of her replying when you reach out to her will be minimal.

Another incidence can happen whereby the girl will lose interest in you while texting.

This will happen because you did some mistakes while texting the woman.

So, she stopped texting you.

Some of the mistakes include, but not limited to;

#7. She had forgotten replying to you.

The girl might have delayed texting you because she saw your message while she was busy, but then forgot to reply.

If a girl has a lot of things going on in her life, this is most likely to happen.

And you also don’t want to show her that you’re the exact opposite by feeling upset about it or confronting her.

How can you find out if she was actually busy?

After a couple of days (like two or three), you can send her another simple text or try to call her.

If all fails, it would mean that she has no interest in you.

You will be better off moving on.

Move on and meet other girls.

What if you want to know of a place where to meet women who seriously want to date you? eharmony has got your back! You will be matched with the kind of women you want. The competition isn’t stiff like dating apps, and few dudes realize that. So you’ll have higher chances of finding matches. Join eharmony NOW for FREE!

How Long Should You Wait Before Texting Back?

As I said, a girl may stop texting you not because she has no interest in you.

To make you remember, she may stop texting or take long to reply because;

In those scenarios, it means that you shouldn’t give up.

how can you tell if a girl is still interested in you or simply ignoring you completely?

Whatever the reason may be, you’ll need to text back at some point.

To find out the real truth- “Is she interested in me or not?”

All that said, when should you text back?

Well, if a girl stops texting you, you should wait for a couple of days (2 to 7 days).

Then text her a simple text that is light and fun.

Whatever you do, never ask why she never texted back! Leave all the past.

You are masculine, remember bro. You don’t want to act reactively to other people’s actions: especially women you want.

If she responds, then you’ll need to set up a meetup as soon as possible.

What’s the point of texting for hours, days, or months with a woman you’ve just met?

After all, you’ll never touch the girl, hold her hand, or get laid over text.

Now I can hear some of you say “I text the girl often to get to know the her”.

And here’s why. Texting is that it is inherently boring.

If the girl isn’t so attracted to you, she will easily lose interest if you over text.

You may get away with over texting when a girl is so into you.

Again, the question I pose to you is…

Will you be so into her like she feels to you?

I mean… it rarely happens in real life. (For all the cards to be laid right)

The point is I’m trying to make is that, if you’re trying to build a woman’s attraction to you, you’ll be much better off doing that one on one.

So, when you text a girl who had stopped messaging you, ask her to hang out as soon as possible when she responds.

What If I Text Again After She Had Ignored Me, But Doesn’t Reply?

This will certainly mean that the woman;

the girl had no interest in you.

If you’re like most guys, you will start chasing the girl by pleading, begging, and trying to convince her to like you.

But, you shouldn’t be doing that!

The woman will never have true romantic feelings for you through logic and reasoning.

Very few guys may become successful when they do that, but that’s called…

You’ll lose your self-esteem if you keep chasing a woman who is ignoring you.

Besides, the chances of having her are slim to none.

Instead of craving to be with a woman who doesn’t like you, what should you do?

Spend that energy and time pursuing women who have some interest you.

But you’ll only achieve that only if you work on your scarcity mentality.

Realise that there are plenty of young, beautiful women out there who would be interested in dating you.

You must also be willing to go to places where you can meet such women.

If you want to reduce the chances of girls ghosting you, don’t take texting girls too seriously.

When you’re trying to text a woman, you shouldn’t over-invest in it.

Neither should you overthink it.

Let your texts be casual, short, fun, spontaneous, and straight to the point.

Essentially, you don’t want your texts to feel like you’re trying to appease her.

Take the mindset that the girl already feels attracted to you, and you’ll act the right way most of the time.

And don’t forget… texting is for setting updates!  I just can’t emphasize that enough.

If you just do that, your texting will improve tremendously.

So that’s it friends!