So there is a hot girl you feel attracted to and you’re wondering how to make her like you: and most importantly make her your girlfriend.

You’re currently single, but you know that shortly there will be a girl that you could come across that you might want to make her like you.

Today, I’m going to be showing you super-simple steps you can follow right now to make that hottie like you and turn her into your girl.

I’ll also identify for you a few most common dating mistakes guys make and to fix them for quick wins.

Remember, a young beautiful woman – with plenty of options – won’t tolerate a lot of dating mistakes.

Do you know what I think? That’s the kind of girl you fantasise about!

If that’s true, I’ll help you out.

How To Make Her Like You And Win Her Over

Step 1: Start a short conversation with her.

In my experience, the easiest way to get a girl to like you is by approaching her and making contact.

It shows confidence and gets the girl to notice you.

However, you’ll get more success if you approach the girl in person. That way you can show her your awesome personality.

You’ll have more success on tinder only if – and that’s a big if – you’re super good looking and have an outstanding profile.

Secondly, even an average looking girl on tinder gets unnecessary attention from thirsty dudes all over the place who are always shooting her messages.

As you’re talking to the girl, don’t forget to communicate to her that you’re sexually interested in her. That’s a big deal.

Why? Because if you don’t make that clear to her, she’s going to think that you’re being friendly.

She needs to know why you’re starting a conversation with her: you like her as more than just a friend.

How to show the girl that you like her in as a romantic partner.

Your first impression is the most important part of meeting a girl you want to date.

That’s what she’ll always remember about you for the most part.

When showing a girl your interest in her, you want to do it whilst building attraction.

And that’s what I’m going to be showing you. You’ll hit two birds with a single stone.

How will you hit the two birds with one stone?

One important thing you should never neglect is that…

When chatting with the girl, you need to avoid pulling off a vibe of trying to impress her and win her approval.

That’s a big dating mistake I see so many dudes make.

Then what should your vibe be when talking to a girl for the first time?

Your vibe should be that you like her, but still want to get to know her better before you invest more.

“But how can I pull off this vibe?” you ask.

Screen her to see if she’s cool enough for you and worthy of your time.

Simple. But effective. And works like crazy more so if the girl is hot.

If a girl is hot, she’ll be used to guys walking on eggshells around her trying to impress her and win her validation.

You shouldn’t be doing that. It’ll kill the girl’s affections to you. You want to separate yourself from all the other dudes she meets.

Most men are only nice to beautiful women because – deep inside – they feel the need to earn her approval.

“But who doesn’t want to be treated nicely?”

But will she feel any romantic feelings for you because you’re being nice?

“But why? ” Because it shows neediness and low value. A high-value guy doesn’t feel any need to win her approval. The reverse will be true.

The key takeaway is…

You should be nice to everyone, but not to only beautiful women.

The nice treatment to a beautiful woman by most men comes from a wrong mindset – to win her validation and approval.

The point I’m trying to make is, when talking to a beautiful girl you like, act like a high-value guy. Act like James Bond or George Clooney!

Screen the girl and make her gain your approval. She’ll fall for you and start to chase you in no time.

So we’ve seen that you need to screen the girl you like and make her gain your approval instead of doing the reverse.

Then one question remains…

How can you screen her and get her to win your approval?

But before we get there, you could be asking yourself…

“Why screen her yet, I have strong feelings for her?”

“She’s hot! What if it just drives her away?”

Maybe that hottie you feel attracted to abducts children to sell their organs for a living?

Secondly, you won’t drive her away because she’ll be chasing you instead.

Why? As I said earlier, girls love guys like you (guys who screen her) because you’re rare. You’re a challenge to her.

back to our last question.

How can you screen the girl to see whether or not she’s got the qualities you need in a girlfriend?

Well, get her to qualify by asking her qualifying questions.

That works very well when you’re hanging out on a first date.

Nonetheless, you should get her to qualify herself to you the first time you talk to her.

Qualifying questions will get the girl to prove herself to you because she won’t want to look dumb.

Also, you want to flirt with the girl, tease her so that you make the conversation man to woman. It also sets the right intentions from the start. 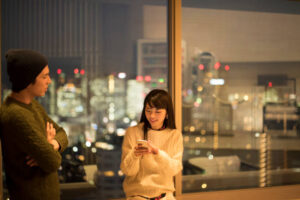 What do most guys do when a conversation with a girl they like gets heated?

They keep talking and talking. Right?

I mean, they get caught up because the girl is giving them attention.

Or they simply just don’t know what to do next.

Always remember that as you’re talking to that girl, that’s not your primary goal. Your goal is to make her your girlfriend, hook up with her or whatever you guys want.

So when the conversation gets heated, like – she’s asking you questions and answering your questions with enthusiasm…

it will be the right time to close.

Ask for her number.

“You seem like a cool girl, let me have your number”

Or (a more direct, and somewhat more risky, approach)…

“Let me have your number/Instagram so we can hang out sometime.”

At that point, just get your phone out and hand it to her.

I usually shoot her a text there and then so that she has my number.

Assuming you got her number, you’ll be able to proceed to the next step.

Do you remember what you want?

You want her as more than just a friend. So you need to act like one by meeting up with her in person.

Don’t get caught up with pointless texting. Just because a girl is replying to your texts doesn’t mean she’s romantically interested.

Asking the girl out is the most effective way of testing whether or not the girl is into you.

It’s also a huge time saver. It filters out girls who give you their numbers just for sexual attention.

After getting the girl’s number, send her a few texts then ask her to hang out.

Be specific as to where you want to take her and the time. Plan everything.

If she rejects you at first, assume she isn’t ready for the date yet.

Now, this is where most guys screw things up. They get anxious, restless and start to chase the girl. They start acting needy and desperate to hang out with the girl.

So never do any of the above things lest you kiss the girl’s affections goodbye. Some girls will often first reject your hang out text as a shit test.

Trust me, I know!

If you shouldn’t chase the girl, then what should you do?

Should you just sit there and wait for her to get back to you?

Those are good questions.

This is what you need to do: Get back to the girl after a few days. Either through a phone call or text.

Whatever you do, never ask the girl or confront her as to why she declined your offer to take her out.

After another conversation or two, ask her out again after a few days.

What if she declines for the second time?

When the girl rejects you for the second time without giving an alternative or if she gives a vague excuse, just do one thing…

just don’t ask her out again! Move on. Go and meet other women to date. It’s not rocket science.

However, if she declines with a genuine reason or she gives an alternative, you can adjust.

If she accepts to go on a first date with you, proceed to the next step. 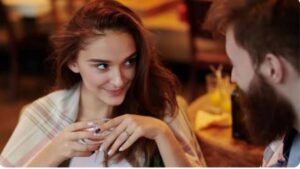 So she accepted to go on a date with you, congratulations! But don’t get cocky yet.

There’s still some work to be done. Nonetheless, that’s a huge step to reach.

Immediately you see the girl on your first date, give her a full-body hug. It will be much better if you prolong it.

That’s very important. It sets the right vibe from the start – that you’re comfortable being physical with one another.

Do remember what I talked about earlier?

Let me remind you… you want to set a frame that you like the girl as more than just a friend on your first date.

You want to do that as early as possible.

And you should be setting the same frame through the date.

So during your date;

All that makes it clear to the girl that you want her as your romantic partner.

If the girl reciprocates your actions, she’ll become your girlfriend in no time.

Pro tip: Assume that the girl already likes you.

Isn’t that being delusional?

Yes, to some extent. But it will make things much easier for you.

If you assume that the girl is already into you, you’re going to act the correct way 95% of the time.

Your attitude is a very important thing. The tricks, techniques and everything else is secondary.

For example, if you feel like you don’t deserve the girl’s affections, she’ll detect that and it will push her away.

No trick will ever help you out if you have a wrong and poor attitude.

But when you assume that she’s already into you, you’ll always act with confidence and certainty. That will make you look way more attractive to her.

I have been actively practising and studying dating for six years. Up to now, I don’t get 100% results from my interactions with the opposite sex. And that’s fine.

The point I’m trying to make is, the above tips aren’t a magic pill.

Some times (if not most) a girl will simply not be into you and you’ll have completely nothing to do about it.

But the above tips will improve your success tremendously because most guys have no clue about the steps they need to take to turn a girl they like into their girlfriend.

It’s easy to just end up in the friend zone of a girl who had romantic feelings for you.

I hope this post has helped. Thanks for taking the time to read.