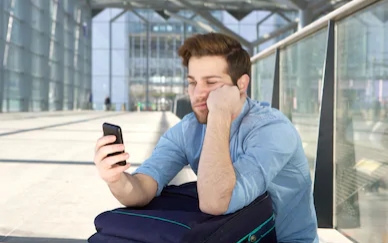 So you’re texting a girl, but she’s taking almost forever to text back.

You’ve been texting back and forth, with your girl and now she isn’t replying to your texts instantly like she used to.

And this has left you asking yourself any of the following questions;

Well, you’re in luck my friends because I’m going to be showing you the answers to the above questions and to all the questions you could be asking yourself.

Should you be asking yourself the question…

“why is she taking long to reply to my text messages?”

The simple answer is that you should be asking yourself that question.

But you shouldn’t be bothered by it!

And you shouldn’t be focusing on it either.

The fact is that you don’t want to be sitting there waiting for the girl to reply to your texts.

It isn’t cool, and it is less attractive.

As a man, you need to be focusing on achieving your goals and making your life better.

Not sitting around waiting for the woman you texted to reply.

What should you be doing?

That way, when a girl delays to reply to your message, you won’t even have time to think about it.

Trust me, a girl will intuitively know if you have been sitting around waiting for her to get back to you.

If a girl notices that you’re desperate for her attention, she will lose attraction to you and eventually start to lose interest in texting you.

The point I’m trying to make here is that,

after sending a message to the girl, carry on with your day and forget that you even texted her.

Nonetheless, it is much easier to not freak out if a girl doesn’t text back immediately when you know why she could be doing so.

Why She Takes Long To Text Back?

In this part of the post, I’ll identify the most common reasons girls take longer to text back and, most importantly, how to fix it!

I’ll also include some examples for you where necessary. 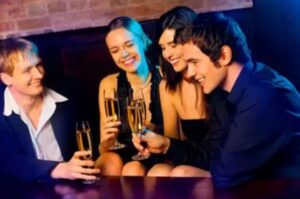 Maybe, you texted her at a time when she was;

If a girl has a lot of other cool things going on in her life, she might find it harder to reply immediately to every text message you send her.

You may not be part of her main priorities, at least for now.

Does it mean she’s got no romantic feelings for you?

The girl may even want to reply later but then forgets. I bet the same has ever happened to you a couple of times.

You may have to watch out to see if her life is a busy one.

She may let you know directly.

#2. Your text messages are boring and monotonous.

Come on, bro! Are you that boring?

The fact is if a girl isn’t so attracted to you, or your girlfriend, she will be more likely to respond after a very long time, if at all.

Other forms of boring texts are ones that are logical, long, and explicit.

If you ever want girls to reply to your texts shortly, your texts need to be short, to the point, light-hearted, and fun.

They need to evoke curiosity and emotions – the opposite of being logical and predictable.

For example, instead of sending a plain text, you can begin your message with something like…

“You won’t believe what happened to me today…” So she’ll be curious to know what really happened to you.

Instead of sending a plain “hi”, you can send…

“I met a sexy girl in a short cute dress today. She reminded me of someone. Hi”

By saying “a girl in short cute dress” implies that you’re flirting with her.

And the statement “she reminded me of somebody”, is an indirect way to imply her.

It triggers curiosity in her mind.

The point is, your texts should also be flirty.

With such a message, it may not need the girl to respond.

Not all messages you send should be responded to.

Sometimes, all you’ll ever need is to put your point across.

Some girls are just aren’t into texting.

They are simply lazy at it and find texting boring.

Such women are always excited and energetic when you meet one on one or while talking on the phone.

However, whenever you text her she takes so long to reply, if at all.

Sometimes, the woman or her friends will let you know that she’s terrible at texting.

#4. She will be texting other guys too.

When the girl is super attractive and single, she will have a ton of attention from so many guys.

So chances are, she will be texting other guys at the same time.

You will be temporarily lost in a pool of other guys who will be texting her so this can make her take long to get back to you.

That being said, you should never take that personal, neither should you feel bothered by it.

If you get to know about it (that she’s texting other guys), and show her that you’re bothered you’ll be more likely to lose.

You don’t want to show the woman that you are feeling jealousy.

She will have power over you. You will have no leverage.

When a woman you’ve just met knows that she has power over you, you’re done.

She’ll play hard to get and you won’t like it.

Secondly, the woman will lose attraction to you.

How does that happen?

I’m glad you asked. And here’s the answer.

Jealousy is a sign of insecurity and low self-confidence.

You will be telling her…

“Look, I feel inferior to all those other guys texting you”

So she’ll lose confidence in you too.

Sooner or later, she’ll stop replying to your messages.

#5. She is losing interest in you.

If a girl starts to take longer to text back than she used to or if she texts you less often, chances are very high that she is losing attraction to you.

But that shouldn’t get you worried because you can always come here and meet awesome girls to date.

The main cause of this is over texting.

Texting back and forth with the woman whom you’ve just known will make her feel bored and lose the romantic feeling she might have had for you.

Texting that leads to nowhere is bad.

And that’s a dating mistake so many guys make.

Don’t get caught up with unnecessary texting because the girl is giving you her attention.

You aren’t her pen pal for christ’s sake!

You should use texting as a means of setting up a one on one meeting with the girl.

You need to give the girl space to miss you.

If her attraction to you is still growing, that little attraction can easily fade if you over text. And she’ll soon start to take longer and longer to text back.

Again, you don’t want to give the girl too much attention before she has invested enough in you.

So text the girl less often, give her space, and her attraction to you will increase.

Then when you text her, she’ll be eager to get back to you.

Sometimes, the woman won’t want you to think like she is easy to get.

She doesn’t want to look like she is desperate for your attention.

She will take her time to get back to you so you won’t think of her that way.

Almost any woman would want, at least on a primal level, to date a confident guy.

How does a woman test your confidence?

Is it by verbally asking you?

Every guy would just reply- “yeah”.

How can she know that you are confident and not like every other guy she meets?

How? By intentionally or subconsciously taking longer to respond to your texts.

A woman who has been texting you very often will stop it all of a sudden just to see if you won’t lose self-control.

She wants to make sure that the guy she’s dating is confident and strong (emotionally).

So it’s best to remain cool, calm and collected when a girl delays responding to your text message.

If you break down by, say;

You’ll have failed the test.

So she may start to pull her attention away from you by texting you less often.

Why does she take long to text back?

Should I Text Her If She Delays To Text Back or Wait? 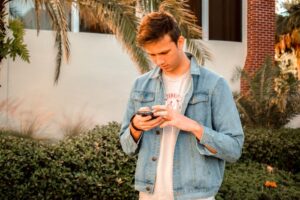 The short answer is No! You need to be patient and wait for her to reply.

As a rule of thumb, you shouldn’t double text a woman.

Double texting means sending another text message without giving the girl ample time to reply to the first one.

So double texting is a bad idea.

When a girl delays responding, give her some time before you send another message.

What if she doesn’t text back at all?

If a girl doesn’t text back, it could mean two things…

One: she’s still interested, but never texted back for whatever reason.

“So when should I text her and how do I know whether she’s interested in me or not?”  You ask.

If she gets back to you, well and good! She may be interested in you.

When she doesn’t text back at all, it will clearly show that she has no interest in you.

It will be in your best interest to let go! And move on to somewhere else to meet new awesome women.

Besides, why would you be trying to get with someone who is clearly not interested in you?

Can you be that desperate, bro?

Chasing girls who aren’t interested in you is a terrible idea.

First, chances are high that you will never get the girl you’re chasing. It will be a waste of your energy, emotions, and time.

Second, it will lower your self-esteem and self-confidence.

You better spend that time, energy and emotions pursuing women who enjoy talking to you.

You will need to develop a mindset that there are places with plenty of awesome women out there.

It will make you feel more confident. It will boost your self-esteem.

If a girl takes long to respond to your text messages, it doesn’t necessarily mean that she isn’t interested in you.

Whatever you do, never ask a woman why she took long to text back.

Unfortunately, even when an average good looking girl delays responding to most guys’ texts, they respond reactively and emotionally.

This makes the girl lose any romantic feelings she might have had.

So you shouldn’t do that!

Do you have any dating problems? Don’t hesitate to reach out to me.