You have just got her number and you want to know how to effectively talk with her on phone.

And not just her, you chat on phone with several girls you just met.

Every time to you talk to a girl you just met on phone, it will determine whether you will hook up with her or become your girlfriend.

If you screw things up, you can make her lose any romantic feelings she might have had in you.

In this article, I’m going to be showing you how to chat on phone with girls in a way that builds attraction.

How To Talk To A Girl You Just Met On Phone.

#1. Your vocal tonality is key.

While talking to a girl on phone, your purpose is to make her feel sexual attraction to you. At the same time, you don’t want her to put you in the dreaded friend zone.

How can you achieve all that?

Speak to the woman in a soft, sexual voice. Don’t talk to her with a neutral voice tonality.

Imagine her as being your girlfriend for a year and speak to her in a normal, soft tone of voice.

Secondly, avoid speaking too fast. It gives off the impression that you have low self-confidence and nervous. Hence, unattractive.

Thirdly, vary the pitch of your voice. Men who speak with a monotone voice are viewed as less assertive, boring and lacking in self-confidence.

Vary your pitch and girls will view you as outgoing and fun. Girls love guys who are fun talking to.

How can you deal with the nervousness when chatting with a girl you like on phone?

One way of dealing with nervousness while talking to a girl on phone for the first time is by doing some other activity while you’re on the phone.

It is easy to feel nervous if you call the girl just sitting by yourself doing nothing.

On that note, you may need to wait and call her when you’re driving, cleaning your house or walking your dog.

Second,  you might want to avoid talking about things that make you nervous like what she’s up to, asking how her day went – instead tell her how your day went.

After getting the girl’s number, it’s often better to call her sooner rather than later. I usually call a woman that very night.

But you can call her the next day or two days after if you want to. Why? Because you want to keep the momentum going.

You want to call her when you and your conversation with her are still fresh in her mind.

#3. Continue with the conversation you had when you got her number.

When you read some articles online, the authors may suggest that you use their own stories. But that will be a huge mistake.

Why? Because there won’t be any congruence. You will come across as fake and women will sooner or later realise that.

You need to be original by talking about your own stories with girls on phone.

Forcing a conversation with a girl on the phone by copying other peoples’ stories is unnecessary.

Simply go back to those same conversational threads you had with her when you got her number.

Use those threads for a little while at the beginning of your conversations then start telling her interesting stories about something that happened in your day.

Tell her an emotional experience in your life that girls would be interested in. If she’s worth pursuing, she’ll also start sharing interesting stuff from her own life.

When a story she says fascinates you, tell her you would like to know more about it. This way, you can easily build an emotional connection with the girl.

It is also an easy way of keeping the conversation long and interesting with the girl.

So long as your conversations are lighthearted, witty and fun, everything will work out well.

There is no need for you to copy and paste other guys’ stories.

#4. Don’t get so attached to outcomes. 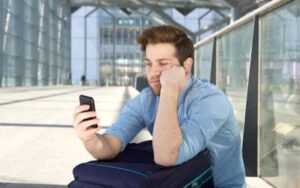 When you talk to a woman you just met on phone, be relaxed. Focus on the moment. Don’t self-analyse and second-guess yourself.

If you think too much about your conversation, it will interfere with your ability to socially vibe.

Don’t be too concerned with the results. Focus on the here and now.

When you vibe with the girl when chatting with her on phone, the results will take care of themselves.

Now, what should you focus on?

Focus on having fun. Relax and don’t attach much importance to your phone conversation.

#5. Let your conversation be informal.

When talking to the girl you just met on phone, you want to avoid engaging in logical and serious conversations.

That’s a mistake I see so many guys make- they engage in boring and logical conversations with women they find attractive.

And then wonder why the girl friend-zoned them or lost interest. So restrain yourself from talking about logical and heavy topics like…

Below are some suggestions for what to talk about in your conversations on phone with girls.

• Interesting stories from things that happened to you.

• Your passions in life (or hers).

The point is, you want to make your conversations with the woman emotionally relevant.

It will be easy for you to build an emotional connection with that girl you just met.

It is easy to win a woman over when you appeal to her emotions.

But you will never appeal to her emotions by talking about topics that are so serious and logical.

#6. Don’t ask her too many questions.

You don’t want her to feel like she’s in a job interview. People in general hate being asked a lot of questions.

It just reminds them of exams that they used to sit during the school days they hated.

Asking her a lot of questions is also boring and predictable. She will want to exit the conversation immediately.

It is ok to ask her a few questions about herself.

If you want to find out more information about herself, do so by making statements instead of asking her questions.

Instead of asking “what are your passions in life”, which is fine to an extent,…

say “I would love to hear about your passions.”

That way, you’ll be talking to her like you guys have known each other for a long time. And people never ask a lot of questions to others they’ve known for long.

During your conversations with women, you want to be witty and funny.

Make playful comments and witty observations about her.

You can also use that as an opportunity to tease the woman- a good way to flirt with her.

All that will attract the girl because you aren’t placing her on a pedestal as most guys do.

Making a woman laugh is also very important because it can help you bond with her.

That being said, you shouldn’t overdo it lest you turn into a clown.

When the humour becomes too much, the girl might not take you seriously.

And doing so actually makes you look like a low-value guy as you’ll be trying hard to seek her validation.

While talking to a girl on phone, you shouldn’t forget the main goal- meeting up with her in person.

That’s why, again, you shouldn’t talk to her all the time on the phone before you guys have met in person.

Why? Because she won’t have any urgency to meet up with you if you guys have known almost everything about each other on phone.

Talking less on phone will help you keep some mystery so that she will have an urgency to go on a first date with you.

If you do most things right while talking to a girl you just met on phone, meeting up with her will be easy.

When you want to ask the woman out on a date while chatting on phone, you can say something like, “It will be fun if we hang out for a little while at a coffee/ice cream shop. When are you free?”

Of course, your plan isn’t to hang out for a little while- you just want her to drop her guards!