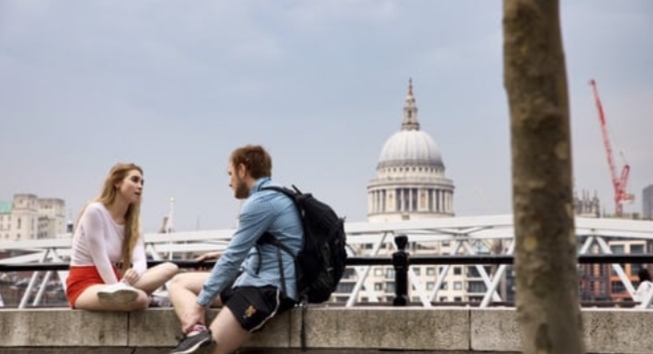 So you want to talk to that hot neighbour, classmate, a girl at the glossary store, or whatever girl you randomly meet, but you have no idea where to start.

So you hesitate to talk to the girl and just like that, a few seconds later, she’s nowhere to be seen again.

Now you rationalize to yourself, “I didn’t have anything to say to her, that’s why I never approached”

Does What You Say To A Girl You Just Met Really Matter?

“You need to talk to girls you just met the right way if you ever want to make them feel attracted to you immediately.”

At least, that’s what the majority of you think.

But guess what. Getting girls you just met to feel attracted to you has less to do with what you have to say.

What you say to a girl you feel attracted to is important, but it won’t be a deal-breaker.

Just think about it for a second! You walk to a beautiful girl standing by herself and you say to her a confident line you copied online…

but, at the same time, making weak eye contact with the girl and looking on the ground.

Do you think the girl will feel fascinated by the confidence you’re displaying? Of course, not!

Why? It’s simple. Your words aren’t congruent with your body language!

But guess what the girl will listen to more? It will be your body language. Why? Because body language never lies. And women know that: consciously or subconsciously.

Again what you say is important, but your body language and attitude are more important. So that’s where you should focus more.

If you have an attitude of pleasing the girl, impressing her, thinking that she’s above your league and not deserving her affections…

there is nothing you can say from this planet that will sweep the girl off her feet because you’ll automatically feel nervous, less-confident and needy- so she will feel repelled by it.

For most of you, focusing on what to say is actually an excuse from actually approaching the girl.

When you find yourself thinking, “I can’t approach this girl because I don’t know what to say”…

…your mind has already decided that you aren’t going to approach that girl and talk to her.

Your convenient excuse is “I just don’t know what to say to her”.

The first thing you want to do before even focusing on what to say is to decide in your head, “yes I want to go and start a conversation with this new woman and I’m going to approach her.”

Now once you commit to this in your mind, what you say doesn’t cross your mind until you’re already in front of her.

If you’re nervous that’s ok. You don’t need to beat yourself up.

Nervousness isn’t a bad thing per se. It’s actually a good thing because it shows that you’re trying something new and getting out of your comfort zone.

The point is, just accept that feeling and proceed anyway.

Nonetheless, knowing what to say can help deal with some of the nervousness that comes with talking to girls you just met. It also gives you a head start!

What To Say To A Girl You Just Approached.

The suggestions in this article should be used as a backup in case you find yourself frozen in front of a girl you just met.

The lines I’m going to give you are divided into two;

Direct lines are kind of pick-up. You directly reveal to the girl why you’ve approached her: that you find her attractive.

When approaching a girl you met randomly, walk up to the girl and introduce yourself by saying something like…

• Excuse me! I just saw you and you looked amazing. I had to come and meet you.”

• I actually approached you because I thought you were cute.

• I saw you sitting by yourself and you looked cute. I had to say hi. I’m ‘your name’.

After introducing yourself to the girl, you can tell her your name and shake her hand at this point, if you want.

Then you can follow it with anything like, “what are you up to?” or “do you always come over here”

Girls will feel attracted to you because you are showing confidence by not beating around the bush.

You’re showing the girl that you know what you want and you’re going after it- and that’s sexy!

The only problem with going direct is it reveals to the woman right off the bat that you’re already attracted to her.

It kinda kills the mystery.

Unless you’ve got something awesome going for you right then like good looks, you don’t want the woman you just met to immediately decide whether she’s attracted to you or not.

In that case, it will be better if you came off under her radar by displaying your attractive personality or traits (rather than let her decide immediately based on superficial things like your looks).

And that nicely brings us to our next form of approach- indirect approach.

During an indirect approach, you simply start a neutral and normal conversation with the girl you just met. Then escalate the interaction to a romantic context later in the conversation.

One way of indirectly approaching and starting conversations with girls you randomly meet is by asking for their opinions or directions.

You can say anything like, “excuse me! where can I find the nearest Starbucks?” Or “excuuuse me! Where is the best place to get some coffee around here?”

When asking for her opinion, you can begin with a statement like, “Hey I need a quick opinion on this…”

There are so many things you can ask a female opinion about. Whatever it may be, it should be a topic that is interesting to women, for example:

• What do you think about these shoes? When you randomly meet a girl in a supermarket.

• Look at what is going on around and start a conversation from there.

• Something you watched about the latest celebrity gossip like “what do you think about Will Smith’s divorce?”

After some time, tell her your name and ask for hers. If you feel like it, shake her hand at this point. It introduces a dynamic that the two of you are comfortable touching each other.

You’ll know she’s interested in the interaction as soon as the conversation becomes more two-sided: she starts making statements on her own and asking you questions back.

At this point, you can ask her out there and then (if you have time) or ask for her number to set up a date later.

You can say something like, “you seem a fun person. We should hang out sometime” then get out your phone and take her Instagram or phone number.

Essentially, you can chat with random girls about anything you want so long as it’s something you’re interested in too.

It works well because a strong level of comfort and familiarity already exists on the girl’s side. There will be less awkwardness when you start a neutral conversation with a woman in such situations.

Another advantage of approaching girls less directly is her defensive shields will be down since you are coming under her radar.

You aren’t directly letting her know why you’re approaching her.

However, that can sometimes be a disadvantage because the girl can easily assume that you’re just being friendly. So she may end up not taking you seriously.

You can simply avoid that by flirting with the girl later on in the conversation. That way, she will know that you want her as more than just a friend.

The hard part of talking to new girls is being able to control your nerves when you’re in an interaction with them.

Just be normal and talk to her like you would talk to any other random person.

Secondly, when it comes to your interactions with women you meet, what you say doesn’t really matter.

Your attitude will be the most important thing. If you seek her validation by trying to impress her or feel fear, she’ll feel less attracted to you.

Whatever you say to girls you randomly meet, you want to say it with total confidence and a dominant body language.

At least that’s where the girl will focus and judge you more. Let your words flow and don’t filter yourself.

Above all, HAVE FUN!