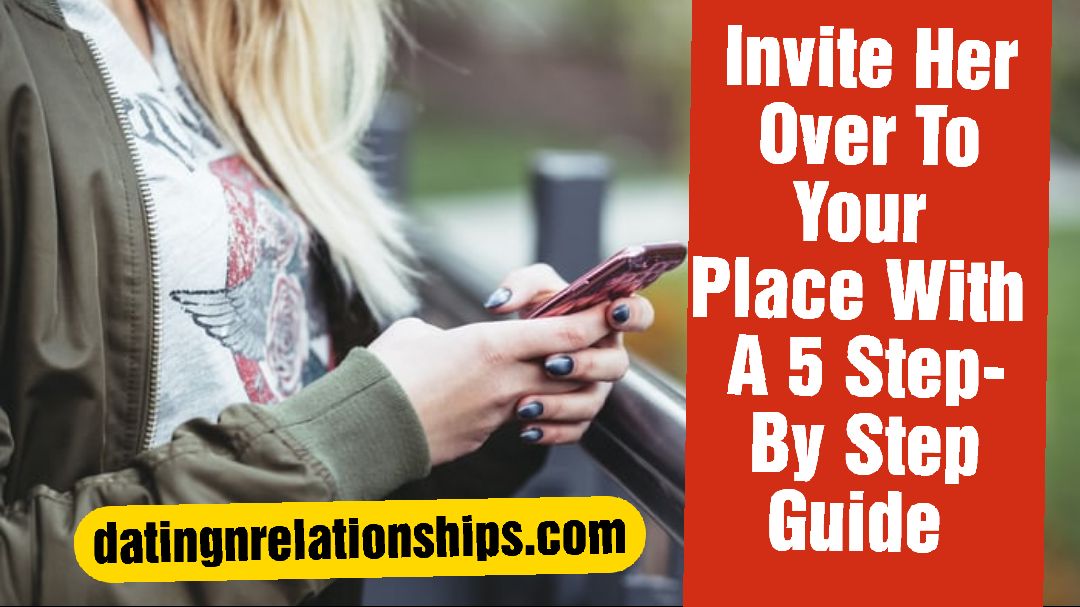 So that you guys can get it on.

Well, you’re in luck my friend because I’m going to be showing you 5 simple steps on how you can invite a girl over to your place.

How To Invite A Girl Over To Your Place Over Text.

This is the most important step of all. If you screw up this first step, all the other steps won’t be possible.

This step shall depend on the age or the kind of girl you want to invite over.

If it’s a younger woman, in her late teens or early twenties, you will have to hit her up the same day or the night before.

You can text her something like “Hey, what are doing tonight. Come over for a bottle of wine or movie.”

Young women can be indecisive.

So when you invite her over to your place over a short period of time, it increases the chances of her coming to your place.

With such women, you want to be spontaneous.

It won’t give her any chance to think long about the idea of meeting up with you at your place.

If you ask her to come to your place after a couple of days, she’ll be more likely to overthink it.

She will start to come up with all the reasons why she shouldn’t come over.

It also gives you less time to f!ck things up.

When the woman is older (mid twenties and above ), you may want to schedule the meet up a couple of days before.

She could be having work to do, and busier.

Women who are older are also less likely to change their minds.

Never think that it will be game time immediately the girl walks into your room.

Biologically and psychologically, it relatively takes long for a woman to heat up for sex.

It can take a couple of hours from when she first enters the door until you’re having sex.

So always remember that.

She doesn’t want to feel awkward or uncomfortable.

So be normal dude! Treat her like you would any other friend you have over.

Chill for a bit and hang out with her.

Tell her some interesting stories about staff that you have in your house.

This is also a very important step that most guys f!ck up.

Comfort is very important when it comes to having sex with a woman. Her sex begins in the head.

If a woman doesn’t feel comfortable, she’ll be less likely to hook up. Even when she feels attracted to you.

So you’ll need to build comfort and first.

• Don’t be too aggressive.

When you appear too aggressive, you’ll creep her out. And she may get a fake message that she’s got an ’emergency’.

On the same point of trust and comfort…

Many girls prefer to hook up at their place where they feel more comfortable.

When the vibe is right, you can move on to the next step.

This doesn’t mean that you should immediately pull her pants off or stick your tongue into her mouths.

What I mean is that you can begin by breaking the touch barrier by getting closer to the girl and touching her more.

You don’t want to delay making a move if she starts to feel comfortable around you.

If you do, it will feel awkward when you decide to do it later on.

Sniff her neck, massage her hand, kiss her lips, slowly unbutton her shirt.

When she isn’t cool with it, she’ll let you know directly or indirectly from her body language.

At this point, you’ll need to back off and give her some space.

If you force a girl to have sex with you, you’ll have committed a crime- rape.

So stop when she tells you to.

That being said, you’ll need to keep persisting by progressing slowly towards the lay until you have sex with her or have her SERIOUSLY you to stop.

Again, you shouldn’t let, and expect, the woman to make a move.

You’re the man. You should always lead the interaction, and be persistent.

That seems obvious, but some guys expect a woman to make the first move.

A guy will just there waiting for the woman to initiate sex.

You shouldn’t do that!

Hey bro, you don’t want to jump onto a dirt bike without a helmet. Do you?

It is important for you to always have some condoms in your room just in case you have to use them.

You want to be safe from sexually transmitted diseases and unwanted pregnancy.

That being said, you need to not make a big scene out of putting on a condom. So try put it on as fast as possible.

You don’t want the woman to start thinking that what she’s about to do is “bad.”

The last thing you will ever want is to trigger that part of her brain that says “having early sex with a guy isn’t cool.”.

Be sure to follow through all the above steps because each and every step is important.

If you do get laid, you will want to call the girl a day after so that she doesn’t feel guilty that she was just being used for sex.

It will help a lot if you want to keep seeing the woman.

And don’t forget to check out eharmony. They will match you with women of any age, personality, and locality if you’re in the US.